Players were surprised to find some modern slang in Pokemon Scarlet and Violet, such as “cheugy.” Director Clavell, principal of the Naranja/Uva Academy, wishes to keep up with the times, but he requires assistance in understanding the term “cheugy.” Players in Pokemon Scarlet and Violet are students at the Naranja/Uva Academy. Students attend classes and interact with faculty members such as Director Clavell as part of the institution. 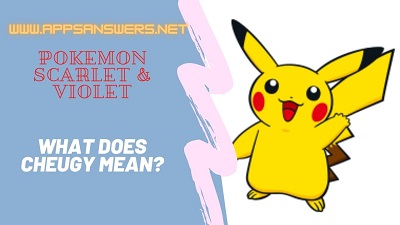 During one of the interactions with the Academy principal, he will inquire as to what “cheugy” means, and players will be given three options. Your response will determine whether or not your friendship with Director Clavell grows. Players are still unsure what happens if you end up becoming good friends with him, but it could indicate that some significant updates are on the way.

On TikTok, the term “cheugy” was popularized to describe the polar opposite of something trendy. It primarily refers to fashion, but it can also refer to the use of slang and online behavior. This term is mostly used by younger people, but older generations have adopted it over time. Pokemon’s main demographic is young children, so it’s no surprise that “cheugy” has been added to Pokemon Scarlet and Violet.

Players will have three options when speaking with Director Clavell:

Do Scarlet and Violet have separate professors?
Director Clavell will appear in both versions of the game, regardless of whether you attend Naranja Academy or Uva Academy. Each version of the professor has its own personality. Players in Pokemon Scarlet will work with Professor Sada, who dresses in prehistoric attire. In Pokemon Violet, players meet Professor Turo, who is dressed in futuristic gear.