Pokemon Scarlet and Violet are exciting new additions to the massive franchise, taking the bones of the RPG series and placing them on an expansive open world with a plethora of places to explore. With such a vast world to explore, you might not want to spend much time inside, but then you’d miss out on one of generation nine’s new mechanics, the Pokemon Scarlet and Violet classes. 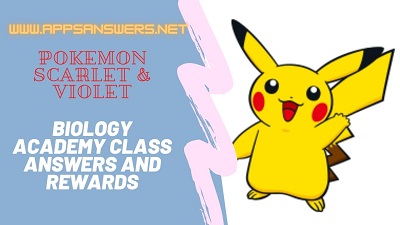 While exploring Paldea and the central city of Mesadoza, you’ll come across a large academy full of students and teachers. After completing the first story, you can enroll in classes, with more unlocking as you defeat gyms around the world. These classes cover Pokemon trivia, game mechanics, and even some fundamental math.

Question: What button would you use to let a Pokemon out of its ball so that it can walk with you?
Answer: ZR Button

Question: Combine one letter and one number below to correctly say when and where Eggs are found
Answer: A, 2

Question: Which of the following is an effective way to warm up Eggs?
Answer: Walking around

Question: What will NOT make Pokemon easier to catch?
Answer: Giving them a Berry

Question: What will make it easier to catch Pokemon of higher and higher levels?
Answer: Gym Badges

Question: How many of the following four methods make it easier to catch a Pokemon? ・Inflicting paralysis ・Using a Poke Toy ・Feeding it a Berry ・Surprising it from behind
Answer: Two

Question: True or false? You can get new Pokemon only by catching them yourself or trading with other Trainers.
Answer: False

Question: If a Pokemon is holding an Everstone, will using an item that induces Evolution, such as a Fire Stone, cause it to evolve?
Answer: No, it won’t

Question: What is the probability of running into a Shiny Pokemon?
Answer: 1 in 4,000